The recent and unfortunate suspension of Ronnie Hults, a NASCAR driver from Colorado who is a lawful medical cannabis patient—along with the recent rejection of a NASCAR car sponsored by Cannabis Planet— would seem to affirm a clear bias that the auto racing organization has against cannabis and cannabis consumers. 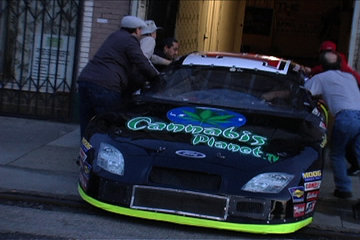 And this from an organization like NASCAR….with its well established roots in the illegal trafficking of untaxed alcohol (i.e., Moonshine) post-Prohibition in America’s southeastern states; a major promoter of tobacco products for decades; and current major billboard for the pharmaceutical industry to promote their drugs.

There appears to be no allegations of Mr. Hults driving while under the influence of medical cannabis and as NLC member from Denver Warren Edson wryly observes: ‘What’s the problem here, all these guys have to do is turn left?’