The Arizona Department of Health Services (azdhs.gov) who administers the medical cannabis program is apparently soliciting information on peer-reviewed research for the efficacious use of cannabis for four new conditions for consideration of including on the list of conditions acceptable for use under the official program. 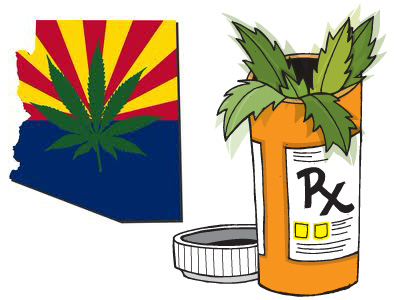 Those four conditions under consideration are:

The administrator, Will Humble, posted to the AZDHS blog on May 24th, 2012 that on “Friday afternoon” (May 25th), they are soliciting public comments both in person and online.

The link to the blog post of May 24th:

The link to what Mr. Humble calls the “online comment tool” is:

Below is a news article from AZ affirming this effort that pushed on the wires late last night.**

Medical cannabis patients in a number of other states have been able to expand the scope of these medical cannabis programs, but only with active participation in the political process.

If you, a loved one or friend in AZ suffers from PTSD, migraine headaches, depression or anxiety, please take the opportunity afforded right now by AZDHS to let your public officials know that you support these pragmatic improvements to AZ’s nascent medical cannabis program.

Kind regards and thanks for your help and support,

PHOENIX (AP) — Arizona is considering requests to expand its fledgling medical marijuana program to allow use of the drug for an array of conditions, including post-traumatic stress syndrome and migraines, beyond those allowed under the law approved by voters two years ago.

The Department of Health Services, which is required under the 2010 law to consider requests to expand coverage, holds a public hearing Friday on the first batch of requests.

Besides PTSD and migraines, the requests for covered conditions include depression and general anxiety disorder. The law already permits medical marijuana use for such medical reasons as cancer, glaucoma, AIDS, chronic pain, muscle spasms and hepatitis C.

Even as the state considers expanding the program, it is still implementing a key part of the law.

Friday is the deadline to submit applications to operate medical marijuana dispensaries. Up to 126 dispensaries will be permitted statewide, but only one per designated area. Those typically are either rural towns or parts of metropolitan areas.

The process of awarding licenses to dispensaries that will sell marijuana to users was delayed by Gov. Jan Brewer’s reluctance to implement that part of the law.

The state has awarded medical marijuana user cards to more than 28,000 people. Chronic pain is the most common medical condition, though users can have more than one. Most of the users also got permission to grow marijuana until there is a dispensary in their area.

Arizona is among 17 states that have enacted laws allowing medical marijuana use, according to the National Conference of State Legislatures.

States’ programs vary, and some already cover the additional medical conditions being considered by Arizona. For example, New Mexico allows medical marijuana use for PTSD, while California’s covered “serious medical conditions” include migraines. Meanwhile, Colorado’s decade-old program has denied petitions to add more than a dozen conditions, including PTSD, hepatitis C and depression.

Consideration of possible expansion of Arizona’s medical marijuana program follows efforts by the state to crack down on early abuses.

The state Medical Board in February reprimanded one physician who wrote certifications for 483 patients without making required checks of a controlled-substance database.

The Naturopathic Physicians Medical Board suspended another doctor’s license for failing to adequately examine patients and document their conditions before certifying them for medical marijuana.

In advance of Friday’s hearing, Health Services Director Will Humble said he is most interested in peer-reviewed scientific studies, not personal testimony.

“To me, it’s really about presenting good science,” Humble said. “To me, that’s the compelling information that we need.”

Humble’s department has contracted with the University of Arizona to identify research relevant to the requests for expanded coverage. “I’m not aware of very much published literature to support adding those,” he said.

Humble said he feels a need to be cautious about adding conditions because he doesn’t want patients to forego traditional medical treatment to opt for questionable benefits from marijuana.

And he said Arizona’s law doesn’t allow the agency to remove a condition once it’s listed, so it would be troubling if scientifically reliable information later surfaces that undermines the value of approving medical marijuana for a particular condition.

Brewer last year balked at allowing dispensaries, saying she feared state employees could face federal criminal prosecution. She later acquiesced after a judge ruled the state had no discretion implementing the dispensary portion of the law.

The state already had received about 200 dispensary applications through close-of-business Wednesday, and Humble said he expected many more before Friday’s deadline.
Copyright © 2012 – Mohave Daily News